During August, the SBCSA had two attempts and one success. The SBCSA is 6 for 6 on the season with every swimmer completing their endeavor. Lynn Kubasek – is the latest person to complete a swim off of Anacapa Island. Her time was officially 7 hours 8 minutes and 10 seconds.

Lynn started her swim at 6:20 am which is later than most who attempt this swim. There was a high fog throughout the swim, which kept the wind down. The sea was calm most of the way with a 2 foot swell. For the first few hours of her swim, there were a lot of jellies and salps. Lynn received quite a few stings. There was also quite a bit of wildlife for the first half of the swim. Whales, dolphins, seals, and lots of birds were present. Once she went pass the famous platform “Gina” she seemed to get a “push” the rest of the way in. Lynn held her stroke count steady throughout most of the swim and the water temp was a balmy 66°-68° throughout the crossing.

Lynn is now the 23rd person to successfully swim from Anacapa since it was first conquered in 1978 by Cindy Cleveland. Nick Caine has the fastest time for a male with a 5:03. Cara Silvas is the fastest female on record with a time of 5:31.

Jane Cairns was the official observer for the swim. Lynn was piloted by Captain Bob Andrieux of the Tina Thumper. Bob has a unique streak going in that he has never had a swimmer enter the water and not finish a swim. This is almost unheard of in Marathon swimming.

On Thursday, September 1, 2011, Jim Neitz of Ventura, CA, successfully completed a crossing of the Santa Barbara Channel from the east end of Anacapa Island to the Silver Strand Beach in Oxnard, just south of the Channel Island Harbor. It took him 10 hours and 43 minutes.

As we idled off of Anacapa Island at 6:45 am, the beginning of the very large southern swell coming out of New Zealand was showing itself, crashing into the arch at the end of Anacapa. The south swell did not really cause problems for the swim, but the waves hitting the island cemented the idea that we were indeed in a wild place. Jim made a quick approach to the island, and we immediately got underway, in order to shorten the time that he spent near the island in the surging seas.

Jim’s father, Jack Neitz, of Oxnard, provided support to Jim, making sure he was well-fed, and that he learned about his progress at each feeding. Tom Ball, also of Ventura, took on an alternating, dual role. He spent the entire length of the swim either kayaking next to Jim, or acting as pace swimmer for Jim. Dave Van Mouwerik, representing SBCSA, was the official observer for the swim.

This swim was a tough one. For the first three hours of the swim some nefarious current kept us pinned as much as 3,000 feet to the west of our line, and Jim did a significant amount of uphill swimming to compensate for the drift. Fortunately the current broke, and we got back on our line. Also, a northwesterly wind pushed on us for the last two hours of the swim, giving Jim another opportunity to swim uphill.

The water temperature started out at 61 degrees, and it held steady at this temperature until about 11:00 am, at which time it dropped to 57 degrees. It gradually climbed back up to 60 degrees, where it remained for some time. However, in the mid-afternoon, the temperature dropped again, to 56 degrees, where it remained for the final two and a half hours of the swim. Mostly Jim seemed impervious to the cold, but it was clear his hands were shaking when he fed, in the last few hours of the swim.

Jim reported that he constantly encountered jellyfish—small ones—but they did what they were designed to do—they stung him whenever they could. But about four hours or so into the swim, the jellies thinned out. We saw many seals, and on 2-3 occasions pods of dolphins cruised by. At one point, about a half mile in front of us, we saw the enormous back of a blue whale as it glided above the water line.

Captain Bob of the 42 foot long Tuna Thumper provided the backbone of support for these successful swims. With his deckhand Mike Bewley, he once again safely provided escort for a channel crossing. Every Bob-and-Mike escorted swim, to date, has resulted in swimmers successfully completing their swims.

Jim is the 23rd person to have successfully completed the Anacapa swim. Incidentally, Jim made this same crossing in 2009, and in May 2011 he made another crossing—that crossing was from the west end of Anacapa to Silver Strand Beach. In about three weeks, Jim is heading to England for an attempt on the English Channel. 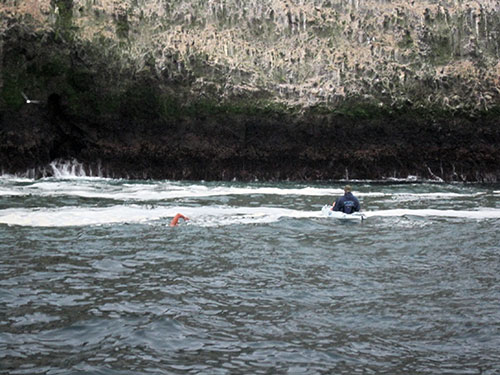 Jim approaches Anacapa Island for the start of his crossing