We had our first successful swim of the season last Wednesday. “Team HTC” consisting of Emily Evans, Steve Lowe, Mike Mitchell, Tina Neill, Forrest Nelson and Kent Nicholas, swam a relay from Northwest Bay on San Clemente Island to Cabrillo Beach in San Pedro. They set a new time record in doing so, covering a new 52 mile course in 25:48 (they actually swam closer to 57 miles as they decided to finish at Cabrillo Beach instead of Pt. Vincente). Their time beats the old record of 33:08 set by “Team Swim for Hope”, exactly 10 years and 5 days earlier. The water temperature cooperated averaging between 66 and 67 degrees the entire swim. Don Van Cleve and Carol Sing handled observing responsibilities for this record setting swim.

There have now been two successful swims off of San Clemente Island - both relays. There has never been a successful solo swim off this Channel Island, but there have been some solo attempts. Who will be the first soloist to conquer San Clemente? Attention all purists who desire a first: It is still up for grabs!

The SBCSA now has 1 completed swim for this season with 25 left to go. Stay tuned for more success stores. 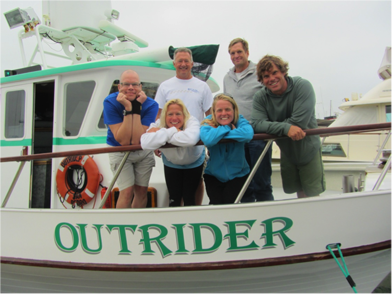 Training for a Marathon Swim

If you are new to our sport, you may have received an abundance of advice on how to train for a marathon swim. It was likely all good information, but it also may have been all over the place which can be confusing. Training for a marathon swims is very personal and usually involves balancing job and family. Most will agree on one thing, which is you need to put in a lot of yardage for your best chance of success.

Four of SBCSA’s board members agreed to share their yardage, by month, done in years when training for a marathon swim. Although this study is far from scientific, it might provide ideas on how to structure your training programs. 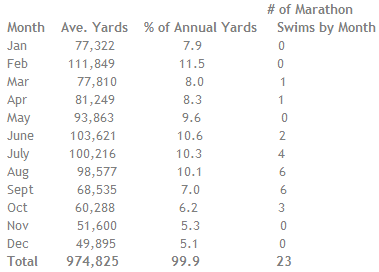 On September 9, 2009, Penny Palfrey became the first and only person to solo Santa Barbara Island which is a 40 mile channel swim ending at Pt. Vincente. She did this swim in an amazing time of 17:53. Recently, the SBCSA received a copy of her video:

A documentary is being filmed on 3 swimmers who will attempt swims this summer from SBCSA islands. The film crew has been busy filming the trio at school, work, play and of course, during training. The crew will also be present for each of their swims. We will keep the swimmers names a secret for now as they likely have enough on their mind. More to come.