The Story of the Emmy Marathon Swim

I recently converted most of my VHS tapes into DVD’s. In doing so, I found a video of a swim that I had not seen in over 10 years. I was the actor in this film and lanolin was my makeup so to speak, but this is not the reason for the story. After all, who wants to see a 260 lb., middle-aged man on TV in a Speedo, having grease applied all over his half naked body by a male friend?

The story of the Emmy Swim is truly not about me, but rather a person named Charlie Rosene who was a producer with NBC television. Charlie is a close friend of Brendan Halffman whom was kind enough to volunteer for the support crew for my attempted swim from Anacapa Island to mainland. Brendan mentioned to Charlie Rosene that he would be supporting this swim and Charlie, who had never heard of marathon swimming before, said he thought, “This could make an interesting story”. Marathon swimming back then was much different than it is today as less than 100 swims had been done off of Catalina and only 5 solos had been completed off the other California Channel Islands combined (5 of the 8 islands had never even been attempted back in 2001). Charlie thought the TV viewing audience would enjoy seeing a short documentary on our sport so he ran the idea by NBC’s Fred Roggin, who agreed.

The date was set for October 10, 2001 and I still remember how uneasy I felt leading up to the swim. On one hand, I was excited because I had only been on TV once before in my entire life. On the other hand, I was worried that I would not make the swim and an entire television audience would see me fail. I was so nervous that I called it off at the 11th hour, but Brendan was persistent and I caved. Wonderful…now in addition to worrying about sharks, jelly fish and hypothermia, I would have to concern myself with looking good in front of the camera during the swim. This is no easy task when you look like me.

To make a very long story short, the swim was a success. I had unusually calm conditions and a great support group. I actually forgot that Charlie and his camera crew were on the boat. Charlie filmed the event and then did some follow up interviews afterwards. The video aired on NBC Channel 4 during November and all was forgotten. 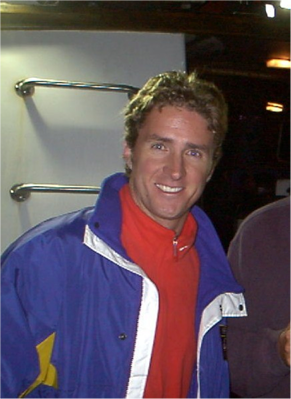 Charlie Rosene on board the Ranger 84 (October 10,2001) shortly before his emmy nomination and award.

Brendan and I were in disbelief, but knew that it would go no farther. We were really happy for Charlie, but we thought the only way he would have a chance to win was if Brad Pitt was doing the swim and Jennifer Aniston (his wife at the time) was applying the animal fat.

Several additional weeks went by and we heard nothing so we assumed that Charlie lost. We just didn’t think a video on marathon swimming would have had a chance against all the other big time nominees…especially with me as the subject.

I think it was February when the phone rang and both Brendan and Charlie were on the other line in a bar somewhere in Los Angeles. I could barely hear them with all the celebratory noise in the background. In all the excitement, somehow I barely heard Brendan exclaim, “Charlie won, Charlie won”. “Charlie won an Emmy Award.” As it turns out, Charlie not only was nominated, but he actually won against some very tough competition. It has now been 11 years, and my thanks still go out to Charlie for producing this documentary, and for his contribution in promoting our sport. Below is a picture of Charlie on the boat and a link to his Emmy production should you care to view it.

Books to Read on Marathon Swimming 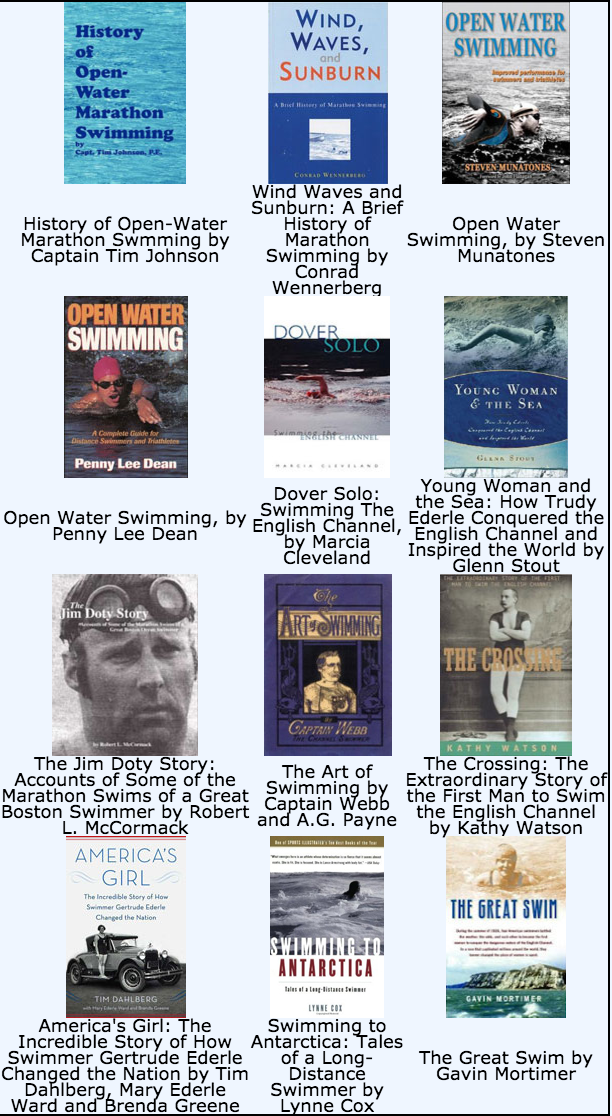