We are accepting applications for the 2012 season

It is that time of year when Marathon Swimmers are finalizing their plans for the upcoming season. We would be honored and thrilled if the SBCSA and one of the 7 islands we represent, was on your short list. We have many amazing swims and plenty of virgin routes for all of you “trailblazers” that want “to boldly go where no man (or woman) has gone before”. There also are several records which are calling out to be broken.

Since we love to dangle the carrot, please allow us to throw out the following:

If you are a disabled or physically-challenged swimmer, the SBCSA invites and encourages you to look at one of our channel islands for a possible marathon swim. We have distances ranging from 6 to almost 70 miles and many options in between. The SBCSA would be honored to help you find that perfect challenge. Of course, all athletes (able-bodied and disabled) will need to have completed qualifying swims representative of their desired distance prior to acceptance.

The SBCSA has never had a disabled athlete complete a swim from any of our 7 islands. Should you have an interest in attempting a swim, please contact us at szornig@aol.com or 949-589-9831.

If you are currently a LinkedIn member (or would like to me), you can join this group at www.linkedin.com. It is free! We want to hear what you have to say. 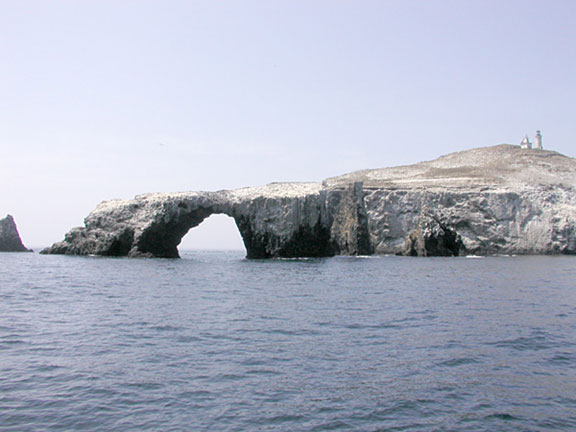 The start/finish of Anacapa Island swims. Arch Rock is approximately 125 yards in front of the island, and the lighthouse in the background. Does anyone notice all the “Bird Snow?”