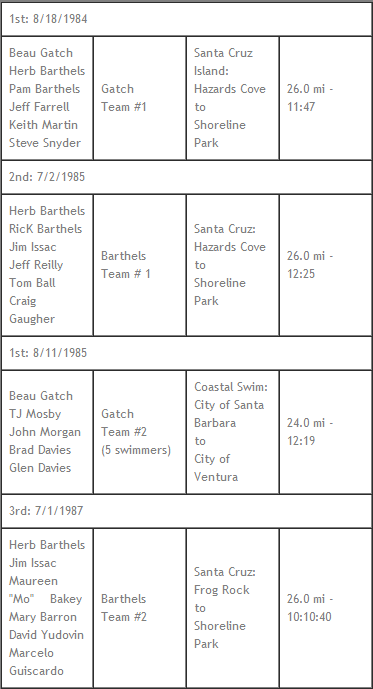 One piece of the SBCSA’s mission is to preserve the history of marathon swims in the Channel Islands. It recently came to our attention that there were some marathon relays in Santa Barbara and Ventura during the 1980’s. The SBCSA visited some of these relay members during February to review news articles, videos, observation reports and hear the remarkable stories. We were able to see enough evidence to conclude that these relays not only took place, but were successful. These true “pioneers” are now credited and listed on the SBCSA website and will be invited to the SBCSA banquet in November so we can honor them for their accomplishments.

The SBCSA thanks Herb Barthels, David and Beth Yudovin, and Beau and Bunny Gatch for their hospitality and help in recreating the past. They were full of great stores and are truly wonderful people. They also continue to be active swimmers. Beau (84) and Bunny (82) humbled “yours truly” in a swim workout at Ty Warner’s beautiful Coral Casino pool. In case you are interested, it only costs $200,000 for a lifetime membership at this 50 meter pool located on Butterfly Beach in Santa Barbara. “Yours truly” did not mind Beau’s “swim lesson” as the pool, without question, was the nicest I have ever had the pleasure of swimming in. Sorry Olympic Club, but your pool is still my second favorite.

Santa Barbara Island is located 37.7 miles off the Southern California coast from the Palos Verdes Peninsula. It is the smallest of the eight Channel Islands. The highest point on the island, Signal Hill, is 634 feet. The island has a total land area of 1 square mile. The island can actually be seen from the mainland on exceptionally clear days. Santa Barbara Island supports a very large sea lion rookery and seabird nesting colonies.

The first European visitor to the Channel Islands was Portuguese explorer Juan Rodriguez Cabrillo in 1542. However, the island was named by Spanish explorer Sebastian Vizcaino, who visited the island 60 years later on December 4, 1602, the feast day dedicated to Saint Barbara.

The first swim off the island was a relay done by Peter Attia, Jason Fox, Marc Lewis, Steve Lowe, Forrest Nelson and Ed Reynolds on 8/29/2006. The second swim was a two person relay of Tim Lawerence and Peter Zabel completed on 8/3/2007. The first and only solo swim was done by Penny Palfrey on 9/25/09. All relays and soloists finished at Pt. Vincente which is the same location where most Catalina Island swimmers exit the water. 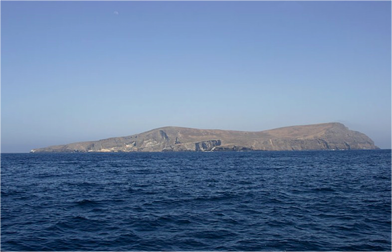 Interesting facts about SBCSA board members