October started out with a new record. Jim McConica broke Nicholas Vargas’ 23 day old record for Anacapa Island to the mainland. Nick swam a 4:58 in September to break the existing record of 5:03. Jim swam a blazing fast 4:38 in near perfect conditions to establish a record which just may hold for several years. Is it possible that someone may actually go under 4:30 someday? Congratulations to Jim on an amazing swim.

On October 3rd, Jim McConica swam from Anacapa Island to the mainland a 2nd consecutive day and managed to finish in 5:24. This swim is equally impressive as Jim was tired and sore from the previous day’s effort. His time of 5:24 is the 5th fastest ever swam from Anacapa. 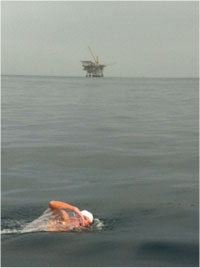 Jim McConica swimming past Gina during his record setting swim. 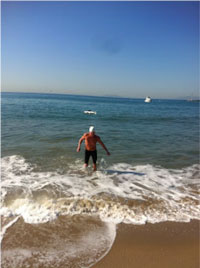 Santosh Patil from India swam from Anacapa Island to the tip of Santa Cruz Island on October 13th. It was only the 4th inter-island swim ever completed in the California Channel islands. His time of 2:13 is a new record.

On October 14th, three relay teams (Team Jessie, Team Augie and Team Coto) did the first ever relay off of Anacapa island. The 3 relays swam side by side and finished in a time of 7:17. The relays were made up of swimmers from the Coto Coyotes Masters Swim Club and the Oak Street Ocean Swimming Group in Laguna Beach.