We are pleased to announce a new series of eight marathon swims, right here in Southern California called “The Southern California Eight.” Unlike the Triple Crown or Ocean’s Seven, west coast marathon swimmers could potentially do all eight without having to buckle a seatbelt on an airplane. “The Southern California Eight” (a.k.a., “The Southland Eight” or “Crazy Eight”) consist of swims from each of the Channel Islands: Anacapa (12.4 miles), Santa Cruz (19.0 miles), Catalina (20.4 miles), San Miguel (25.9 miles), Santa Rosa (27.5 miles), Santa Barbara (37.7 miles), San Clemente (54.4 miles), and - in what could go down as the greatest single marathon swim in history - San Nicolas Island, 61.2 – 69.3 miles depending on course. It does not appear that anyone will lay claim to this title soon as only 2 people have completed island/mainland swims from 3 different islands while just 17 have completed swims from 2 of these islands.

“The Southern California Eight” series was created to provide domestic marathon swimmers an opportunity to do something challenging, unique and very special in the western United States without the costs of travel to swims around the world….we know marathon swimming is not cheap! Due to the varying distances of each island and the fact that two of the islands have never had a successful solo swim, this series may remain unconquered for several years. Some marathon swimming experts feel it could 40 to 50+ years before all eight islands are conquered by one person. The SBCSA believes that with the soaring popularity of marathon swimming, this incredible achievement will likely happen sooner rather than later. The Las Vegas odds makers have set the over/under at the year 2020.

Eight islands, One person! Who will be the first to write their name in the history books? This just might be the greatest marathon swimming accomplishment of all time.

San Clemente Island is the southernmost of the 8 Channel Islands of Southern California. It is owned and operated by the United States Navy and is part of Los Angeles County. It is 21 nautical miles long and is 56.81 square miles. The island is uninhabited. The city of San Clemente (aka the Western White House) located in Orange County, California is named after the island.

History - Archeologists have found traces of human occupation on San Clemente Island dating back a few thousand years.Later inhabitants left trade materials from the northern islands and from the mainland. It is believed that the Tongva Indians from Catalina may have occupied the island.The first European to sight the island was Juan Rodriguez Cabrillo in 1542, who named it Victoria. It was renamed by Spanishexplorer Sebastian Vizcaino, who spotted it on November 23, 1602, Saint Clement’s feast day. 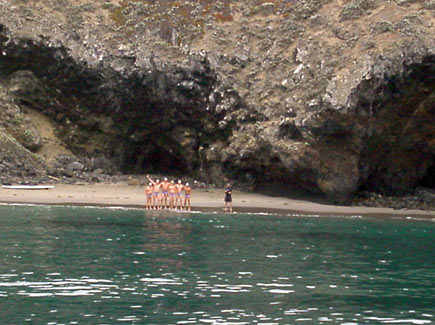 There has been one successful marathon relay swim from this island. In 2002, a group of 6 swimmers which called the event “The Swim for Hope”, took 33 hours and 8 minutes to navigate the 55 miles. The team raised money for “The City of Hope Cancer Research Center” to help children with cancer. Largely in part to relay member and world renowned marathon swimmer David Yudovin, the event is still raising money ten years later. The swim for hope has generated over $400,000 to date for pediatric cancer.

Relay member Mike Suttle vividly recalls the swim. “We had lake like conditions and 70 degree water the entire distance. We also ran into strong head currents. We expected the swim to take 24 hours and it ran 9 hours longer than anticipated. This actually turned out to be a benefit as we finished during the San Clemente Ocean Festival in front of a thousand cheering people whom the festival regularly updated on our progress.”

There has never been a successful solo swim off of San Clemente although there are two known attempts which were both aborted after 24 hours of straight swimming.