This summer, we started a very unusual swim or rather, set of swims. A few swimming friends decided to swim around every ocean based pier in the State of California skipping only the 35+ piers in San Francisco Bay. We started on August 17th and finished our pier safari on November 17th. Although it was never our intent to become the “first” or see how fast we could accomplish the feat, we swam around 73 piers in 93 days. 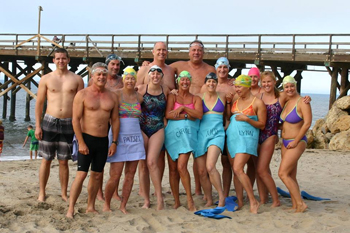 In total, Lynn Kubasek, Ray Medtvelt and I subjugated 73 piers… logging 35 miles of swimming, 50 miles of walking, 90 hours of driving, 20 hours of boating and 30 solid hours of shivering (Ray actually stopped after reaching his goal of 60 piers). We swam in water as cold as 47 degrees in Northern California and as warm as 72 degrees in the Southern portion of the state. Although this endeavor could never be classified as a marathon or channel swim, we elected to follow English Channel rules and swim without any artificial warming devices. In other words, we did not use wetsuits.

A good friend asked me why I would do something like this opposed to a true marathon swim. My answer was fourfold; it was different, it was fun, it was both mentally and physically challenging, and 73 piers likely had not been done before (A wonderful person by the name of Conrad Von Blankenburg, who was very helpful, swam around 40 California piers finishing in 2006). The swimming distance was never the issue for us, but try getting wet, cold, dry and warm 73 times and you will get the picture. The appeal of this adventure is similar to a young fan that wants to see a baseball game in every major league ball park or an adult who desires to visit all 194 of the world’s countries during their lifetime. We set the bar low so we were sure to complete our goal.

Our piers ranged from Crescent City just south of the Oregon state line down to Imperial Beach at the Mexican border and every pier between representing 933 miles of California coastline. Although we can’t classify this as a marathon swim, it was certainly a marathon adventure and way too much fun. We have memories to last a lifetime.

We visited new places we had never been to before. We likely swam in virgin waters and possibly around piers which no human ever has. We pushed the limits both physically and mentally gaining confidence with each conquered pier.

I believe California has one of the most scenic coast lines in the world. Each pier we circled reinforced this belief. We were rarely disappointed in the places we swam. I will not forget swimming directly in front of the 17th hole at the famous Pebble Beach golf course on the Monterey Peninsula, around an old rickety pier located in a small cove surrounded by one of the most amazing views I have ever seen. I remember the incredible beauty of the San Simeon pier located in San Simeon Harbor directly below Hearst Castle and thinking how it has remained pristine and unchanged since the Hearst Family occupied the land. I also can still visualize the quaint Camarillo pier located in the midst of a thriving seal rookery. I won’t forget the sunken ship at the end of the Sea Cliff State Park pier or California’s newest pier (a rebuild) in Trinidad which is my second favorite pier in the state. Cayucos, Pacific Beach, Avalon and the Paradise Cove piers are all rustic and uniquely attractive pillars of entertainment. The sounds, smells, weather and ocean’s behavior on any given day added to their allure and charm.

We swam around the Santa Cruz Municipal Wharf pier which is the longest wooden pier in California and the longest structure in the Pacific Ocean of any type at 2,745 feet (It took us over 30 minutes to finish which gave us plenty of time to smell all the good food the pier’s restaurants were cooking). We also made it around the Ocean Beach pier which is the longest in Southern California at 1,971 feet. We enjoyed Sterns Wharf, California’s oldest pier constructed in 1872, and Newport Pier constructed in 1888. We also went around another personal favorite in Point Arena. This is the only set of planks in the state where they have hot showers located on the pier. For only $2, you can go from 49 degree water straight to a 104 degree shower. It is these simple things in life which give ocean swimmers such great pleasure. 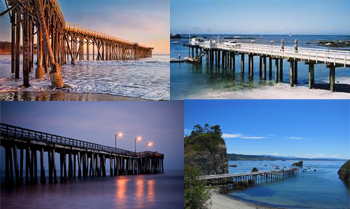 My favorite Piers – (clockwise) San Simeon below Hearst Castle, Stillwater beneath the 17th green at Pebble Beach, the state’s newest pier in Trinidad and Cayucos north of San Luis Obispo.

We swam in lake-like flat water and seemingly unfriendly, hostile water. We swam in deep blue liquid with 40’ visibility where we could see actual ripples on the sand below us. We dove in to water full of sediment which took on golden colors, and experienced dark black mystic water with bioluminescence. We also found healthy forests of kelp so thick that we felt like we were almost crawling on top of the water. Unfortunately, we also encountered some polluted bays with runoff and sewage leaks. This reminded us that we all really need to do a better job of taking care of our oceans. 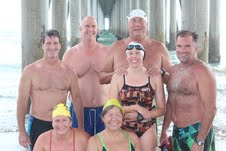 We encountered all forms of sea life from Sea Lions to Elephants Seals, Otters to Whales and Dolphins to sea gulls. I won’t soon forget the 5’ Leopard Shark which swam beneath me at Catalina. I am quite sure my loud, female sounding scream was as unnerving for the shark. We saw schools of colorful fish so thick they blocked our sunlight and circled around us like a Kansas City tornado. We also saw giant orange starfish, numerous species of crabs, sand dollars, clams, jelly fish and squid.
Up and down the coast, we were met by local, open water friends who said hello or joined us for a swim around a few piers. They gave us confidence and led the way. I am quite sure we would have skipped some sketchy piers if it were not for Evan, Cathy, Rob, Byron, Theo, Natalie, Julian, Tanya, Peter, Carol, Julie, Frances and Bill whom we owe big time. We also appreciated John Coughlin’s invitation to his home in Half Moon Bay. His positive attitude and big smile are contagious and a reminder that we all can overcome and prevail.

I also have to mention all the bystanders who watched us swim. It seems that the farther north we went, the more curious the people were and the more questions we answered. We felt like mini celebrities, if only for a few minutes, as we swam around the states most northerly piers. We all agreed that we were likely part of some dinner conversations in Point Arena, Trinidad and Crescent City. 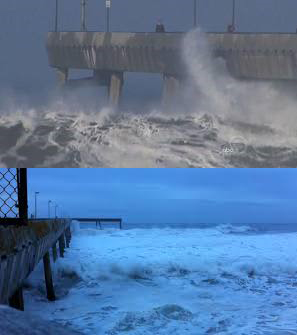 I would be remiss if I did not mention the Pacifica aka “Death” pier. I am not sure how we made it around this pillar of demise nor why I am still here. For the first time in my life, I was able to experience what it is like to be held under for two complete waves during a very large set. The helpless feeling was compounded by the coastal fog, 57 degree water and lack of lifeguards. It took everything I had to make it around this unkind structure. I was told that even the best open water swimmers steer clear and now I understand why. Needless to say, I will not be visiting this pier again anytime soon. Evan, Cathy and Lynn gave me the courage to circumnavigate this bad boy (Not to mention that I really had no other choice but to finish, once they coerced me to the end of the pier). Our good friend Ray did this pier a few weeks later and had lake-like conditions. Did I mention that life is unfair?

Thankfully, we had plenty of friendly piers as well. The 15 piers on Catalina were a challenge logistically, but a piece of cake to swim. The two piers on Santa Cruz Island were also very easy. Each long and difficult pier seemed to be offset by a short easy pier. If you ever want to swim around a fun, short pier, try Paradise Cove in Malibu.

We ate at some amazing restaurants and enjoyed fantastic coffee houses. Each cup of coffee which followed a pier seemed to taste like it was the best we ever had. The early morning omelets, bowls of clam chowder, loafs of sourdough bread and local hamburgers were all award winners in our book. I think maybe we should talk to the Discovery Channel about a new food show called “Piers and Food”. I for one would watch it. 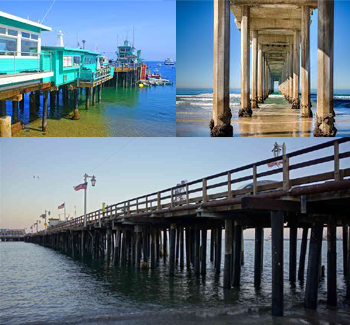 Our pier Safari has concluded and I am now going through what is known as PWS or “pier withdrawal syndrome”. Many marathon swimmers go through something similar. It hits the hardest once you complete your goal and your weekends which were occupied with swimming, are now free. You wonder what you are going to do with you time. In the most severe cases, you begin hearing voices with the question…What is the next? What is the next? Hmm…..I wonder how many lakes there are in California. Which is the highest and the lowest? What is the longest river in the state? Which is the warmest and the coldest?

Open water swimming is wonderful because there are no limitations. Anyone can create their own adventure with just a little imagination. Now allow me get back to planning that 6 person relay from Hawaii to Laguna Beach….just kidding!

*to see a full list of piers swum look to the sidebar.

L to R - Scott, Lynn and Ray before entering 48 degree water at California’s northernmost pier in Crescent City and 47 degree liquid in Trinidad. Do you notice that I am the only one not smiling?

« Who is David Yudovin and Why is He Good for Our Sport? Happy Holidays »