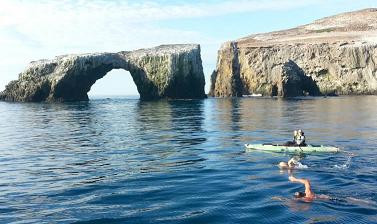 There was only one SBCSA attempt and successful swim in August and it did not come easy. On August 31st, Lynn Kubasek attempted to be the first person to successfully circumnavigate Anacapa Island. There have only been two successful circumnavigations of any California Channel Island and they were both done at Catalina.

Lynn started her swim at dawn and covered approximately four miles in the first two hours. She then rounded the eastern tip of Anacapa known as Arch Rock to swim the back side of the island. Unfortunately, she was greeted with a 1.5 knot head current. She swam her heart out for the almost 2 hours, but actually lost ground. The current was so strong that she swam backwards and was pushed away from the island toward the mainland. The crew had several conversations with Lynn and finally it was decided to abort the swim.

The SBCSA has many different channels, islands and routes to choose from which are all in close proximity to each other. Lynn had been swimming for a little less than 4 hours and she was still feeling good and her spirits were high. Since the boat was rented for the entire day, the suggestion was made to attempt one of the shorter passages between the islands. Lynn desired to turn lemons into lemonade so she agreed and chose the passage between Anacapa and Santa Cruz Island. This course had been done twice before, but always in the direction of Anacapa to Santa Cruz. No swimmer had ever swam in the opposite direction which appeared to be the path of the currents. The distance between the islands is a total of 6 miles and the conditions are rarely friendly.

Lynn started this second swim at 10:30am and swam well. She covered about 75% of the course before encountering another head current. She was a little over a mile from completing the swim when a current started pushing her rearward. She again lost ground. Lynn was determined and she fought hard for 1 ½ hours while her escort boat attempted to find cooperative water. Just when it looked like we may have to call off Lynn’s second swim on the same day, she prevailed and broke through the current. Lynn completed the 6 mile adventure in 5:08:25. This was obviously not a fast time, but even the great Michael Phelps would have had a 4 hour swim on this day. Congratulations to Lynn for remaining cheerfully flexible and turning a difficult situation in to another successful channel swim. 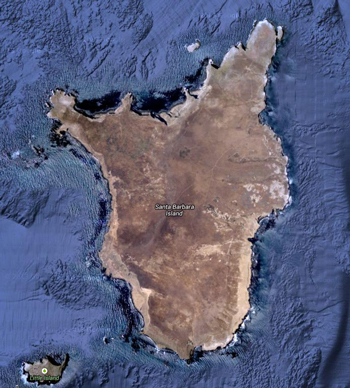 The island is 38 miles from the nearest mainland (San Pedro) and 24 miles from Santa Catalina Island.

Santa Barbara Island is approximately 1.5 miles wide by one mile long; one square mile; 639 acres. It is the smallest of the 8 California Channel Islands

It has an average rainfall of 12 inches.

The highest point is Signal Peak at 634 ft.

It is home to 14 endemic plant species and subspecies that occur only on the Channel Islands. Forms of buckwheat, dudleya, cream cups, and chicory are found only on Santa Barbara Island.

The island’s cliffs offer perfect nesting habitat for one of the world’s largest breeding colonies of Scripps’s murrelets, rare seabirds.

Absence of freshwater led the Tongva and Chumash to use the island on a seasonal basis and as a stopover between Santa Catalina and San Nicolas Island.