We had our first successful swim of the season on July 26th, when Regina Matheu from Guatemala swam from Santa Cruz Island to mainland. Regina’s time was 11:40:44. She was moderately hypothermic at the finish so lifeguards and Oxnard Paramedics monitored her post swim. Regina was released by the paramedics after an hour, went to the airport and returned to Guatemala. Santa Cruz Island is Regina’s second Channel Island swim as she also successfully conquered Anacapa in 2008. Congratulations Regina!

There have been 10 successful solo swims between Santa Cruz Island and mainland and 13 successfully relays.

There has never been a double from or to Santa Cruz.

6 of the successful solo swims were done by men and 4 by women.

The closest route to mainland from Santa Cruz Island is ½ mile shorter than Catalina. However, the fastest time is a 9:47:39 (done by Evan Morrison in 2012) compared to Catalina which is 7:15:55 (accomplished by Penny Lee Dean in 1976)….a 2 and a half hour difference.

There has been only one successful sub 10 hour swim.

There are two distinct routes off of Santa Cruz Island with one finishing in Ventura and the other in Santa Barbara.

There has never been a swim “around” Santa Cruz Island.

The only successful inter-island swims in California Channel Island history either started or finished on Santa Cruz Island.

Santa Cruz is the 3rd most popular California Channel Island for marathon swimming behind Catalina and Anacapa islands. 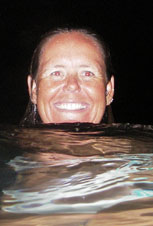 Fellow SBCSA board member and open water swimmer, Jane Cairns is the newest lifetime member of the SBCSA. The cost to join this special group within the SBCSA organization is only $250. Members receive a $100 discount on all solo sanction fees, a $50 discount on relay sanction fees, a 25% discount on the annual banquet, name recognition in various SBCSA publications, and the satisfaction of supporting an association that works hard to promote safe, traditional, environmentally conscious marathon swimming in the California Channel Islands.