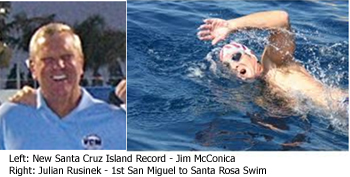 September was a strong month with 10 successful solo swims and 2 successful relays. Jim McConica set a new time standard when he bettered former record holder, Evan Morrison’s year old Santa Cruz Island record. Jim waited to find the perfect day and his patience paid off. Jim has established a record which may stand the test of time. Julian Rusinek also had a notable swim when became the first person to swim from San Miguel Island to Santa Rosa Island. Congratulations to all our September swimmers. 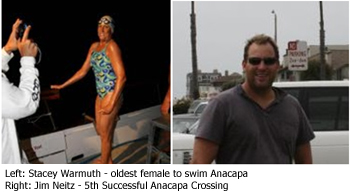 The SBCSA has recently adopted a new policy to address potential littering and environmentally destructive behavior by our swimmers. While some will argue that marathon swimming in itself is not an eco-friendly sport (as with all sports), we can still do our part to keep our waterways clean and free of debris.

In The SBCSA’s efforts to be green, our new policy reads:

Of course, we desire to keep our rules to a minimum, but believe this is a necessary policy which must be followed. We cannot put marathon swimming over the health of Mother Nature…and who wants to swim through a trash pile anyway? Let’s keep it clean so future generations of marathon swimmers can enjoy our sport.

Once again, the SBCSA will be holding our annual awards and recognition banquet on the same day and in the same city as the CCSF which allows marathon swimmers to attend both banquets. As in past years, the CCSF banquet will be in the morning while the SBCSA will have an evening dinner. There will be a fun, social swim between the two banquets. Here is the schedule for the day.

The SBCSA’s banquet will be held at Raffaello Ristorante in San Pedro, California. The cost is $25.00 per person (no host bar) or $18.75 for SBCSA lifetime members. If you plan to attend, please send a check made payable to the SBCSA by October 31st to:

Please include the names of the guests in your party. We look forward to seeing you in November. 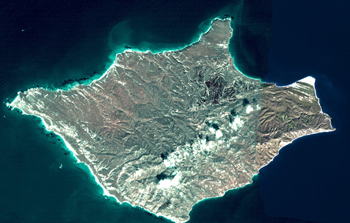 The oldest human remains in North America, dating to 13,000 B.C., were discovered in 1959 on Santa Rosa Island

Santa Rosa Island is home to only three native terrestrial mammals-the island fox, island spotted skunk, and island deer mouse. They are all endemic to the Channel Islands.