On shark sightings in marathon swimming

I was recently asked what I would do if a shark presented itself during a marathon swim I was observing. My answer is always the same. I am going to immediately pull the swimmer out of the water unless I can quickly determine that it is a small, harmless shark. If I am wrong, so what! The swimmer can always return next year and try again. I would rather have a swimmer and family scream at me for pulling the swimmer too soon than for waiting too long. 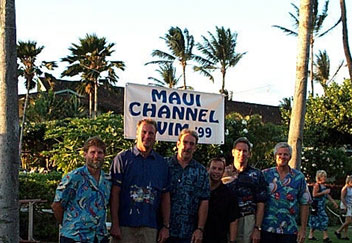 In 25 years of open water swimming, thankfully I have only had one serious shark encounter. However, it made such an impression on me that I have a strong belief in a proper course of action if there is a sighting. It happened during the Maui Channel Swim in 1999. Our teammate, Rick Reeder, was finishing his relay leg when the captain saw a 12-15’ Tiger shark headed for the swimmer who was 25-30 yards from the boat. The 5 swimmers and 2 captains on board the boat did not think even for a second we would allow the swimmer to continue. We all immediately yelled and screamed for Rick to sprint to the boat as the captain reversed the engines. The boat, swimmer and shark all met at the same time. We all grabbed for a part of Rick’s body and flung him into the boat like a Raggedy Ann doll, just as the shark passed within a few feet from Rick.

We knew we had made the right decision and still agree that we would have done the same thing even if the shark was 250-300 yards away the swimmer instead of 25-30 yards. We were disqualified from the race, but we did not care because our swimmer, friend and teammate was safe. Plus, we had great fish tales to tell at the post race luau.

This event had a profound effect on me, but I think I am a safer observer for it. 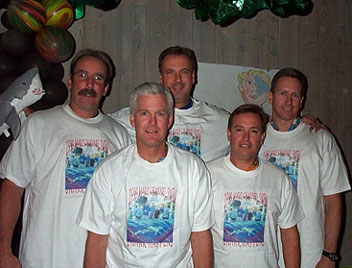 There have been 5 unsuccessful swims between Anacapa and mainland

There has never been a swim “around” Anacapa Island

The youngest female to complete Anacapa was 13 years old. The oldest female was 53 years old (Lynn Kubasek, pictured above!)

The youngest male to complete Anacapa was 10 years old. The oldest successful male was 68 years old

In the western U.S., Anacapa is second only to Catalina in marathon swimming popularity