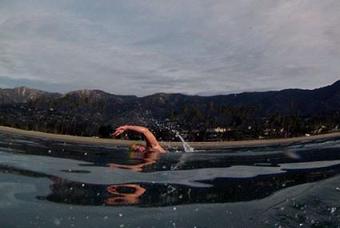 In my earlier years when I was young, feeling invincible and convinced that I would live forever, I would actually go out and train alone in the ocean. It was not my preference, but there were those times when an ocean training partner was unavailable so I wouldn’t hesitate to jump in and swim solo.

I am now 53 and more cautious when doing ocean swims. I avoid training alone (even if it means not swimming) and discourage my friends from swimming by themselves. It took me many years to learn, but it is not wise nor safe to swim alone under any circumstances.

Three years ago, a friend of mine and masters teammate was swimming in the pool. During a noon workout he suffered a severe stoke. Thankfully, one of our teammates who is a paramedic was swimming right next to him. He was given proper medical care and has since fully recovered. Two years ago a female friend and triathlete was running on a track. She also suffered a severe stroke, but was quickly administered to by others and also made a full recovery. Eighteen months ago, one of my best friends who is also a triathlete, just finished a bike ride and while he was resting at home afterwards, suffered a heart attack. He too has made a full recovery.

Here is the point; there is always more risk swimming in the open water versus swimming in a pool or exercising on dry land. There is marine life, big surf, dangerous rocks, swift currents and moving boats. There are also our bodies which are all ticking time bombs. You never know when something is going to give out or go off.…even with those who appear to be the healthiest. If my three friends had been swimming in the ocean (instead of swimming in the pool, running on the track or finishing a bike ride), I am quite sure two of the three would not be here today. They were fortunate that they were close to people who could quickly administer to them, call the paramedics and get them to a hospital. In an ocean, our only life line during a training swim is that person we are swimming next to. There is no ground to lay or fall on, place to rest, or cell phone to use for a call. Even if someone on shore recognized you were in trouble, could you wait the 2 to 15 minutes it might take for a lifeguard to swim to you?

As ocean swimmers, we must remember we are vulnerable and that we always need to swim smart. This means……

On those rare occasions where you feel you absolutely must swim solo, please make sure you tell a friend or family member what you are doing and where. You should also 1) swim a route which is in close proximity to shore in event a quick exit is necessary, 2) wear a bright swim cap, and 3) carry safety products such as a SaferSwimmer™, rescue tube, wrist/ankle ID band and boat whistle. If you are training at night, you should add a signal light and glow stick.

A month ago I had a minor scare, I was swimming with some friends parallel to a beach in Laguna. I was having difficulty getting a full breath of air. This caused my heart to beat faster and eventually skip a few beats. I told my training partners that I did not feel well and that I was going to swim into shore and walk back along the beach. Initially they said they would watch me swim to shore and then one of them decided to swim in with me. He even escorted me on the ½ mile walk back to our starting point. As it turns out, everything was ok as I just had a bronchial flare up. However, it was awesome to see how my friends over responded… they did exactly what each of us should do if a friend is in trouble. They swam in close proximity, checked on me regularly and escorted me to shore. They acted in a safe and responsible manner.

I encourage everyone to find swimming groups and training partners which practice safe swimming. If you train with someone who always takes off on you because he or she is faster, then it is time to find another person or group to swim with. Don’t train with someone who doesn’t look out for you in the same way you are looking out for them. Everyone in the open water needs to act as a lifeguard for each other. We have a responsibility to ourselves, our open water friends and our sport.