Who is David Yudovin and Why is He Good for Our Sport? 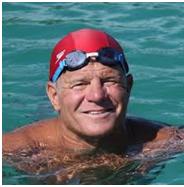 David Yudovin began marathon swimming in 1976 and is still going strong at the age of 62. In between, he has gone into cardiac arrest where his heart stopped beating for over an hour. He also endured a 3 year battle with cancer where he was given only a 50% chance of survival. Although these would have been perfectly good reasons to hang up his Speedo, Dave persevered and has swam his way into the record books and the marathon swimming hall of fame. Dave has swam solo across 40 different channels in various parts of the world during this 37 year span.

Dave Yudovin is not a name everyone instantly recognizes because he is not particularly fast and he quietly goes about his business. Dave does not care about the press or fame…he just wants to swim across channels. Dave thinks of marathon swimming as the last of the pure, noble sports. He feels marathon swimming is very personal and is about man or woman against whatever the sea throws at you on a particular day.

Dave is old school. He wears a single cap, goggles, swim suit and grease. He feeds every 30 minutes and uses a basic escort boat. He follows English Channel rules. This is the way it has been since his first swim. He does not make his swims easier with the use of new technology other than GPS which every modern day marathon swimmer uses. He wants to keep doing it the same way Captain Webb did 137 years ago (minus the brandy of course).

Dave has never used a jelly suit, compression suit, wetsuit, rash guards, fins, gloves, shark cage, divers, neoprene cap, streamer, shark bombs, shark shields or sharp shooters during his marathon swims. He has never taken a solar shower, exited the water due to a shark sighting or lightning, rode the wake of the boat, rested on his support vehicle, drafted, discarded trash in the ocean, or touched a member of his support crew during any of his swims. If Dave ever left the water during a swim, it ended right there and he returned another time to try again.

How does Dave do this without the assistance of technology? The answer is simple….Dave is a student of marathon swimming who trains specifically for each swim. Dave does not believe in short cuts. This is not what our sport is about. He believes you learn from each swim and apply that knowledge to future swims. For example, Dave thoroughly researches his swims and attempts to find the window for favorable currents and conditions. He swims when he knows the chance of running in to box Jelly fish or other threatening critters is the lowest. When Dave had his heart attack due to hypothermia, he began training in cold water and add a few extra pounds when conditions dictate so. He has lost weight for warm water swims. He actually has sought out Portuguese man o’ war to train for swims in infested waters.

The only EC or CCSF rule Dave has not followed is dry feet starts and finishes. In other words, if there is no access to a beach, he may start or finish a swim with a simple touch of a wall or cliff. He also wants to be respectful of any regulatory and cultural laws which prohibit him from accessing land. On one occasion, he was allowed to walk up to ankle deep water, but not allowed to step on the island without being arrested.

Some of the purists who have inspired Dave include Lynne Cox, John York, Kevin Murphy, Allison Streeter, Des Renford and Florence Chadwick…all who did and do it just like Dave. Pure, conventional, traditional, respectful. Our sport needs more Dave Yudovin’s and less of those who try to find an edge with technology. It is Dave’s hope that the next generation of marathon swimmers, the Owen O’ Keefes, Fiona Gohs, Nick Caines and Nicholas Vargas continue to follow our long tradition and maintain the integrity of our unique sport.