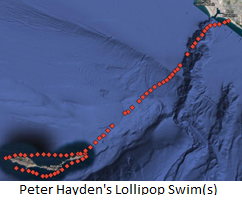 This season has been particularly challenging. It seems that Mother Nature is throwing almost everything she can at us. In addition to our usual fierce winds, strong currents and high seas, we have had three Pacific hurricanes and unusual summer storms to contend with. As a result, we have had only 9 successful swims to date out of 16 attempts. The times are slower than normal as well. Of course, when the challenge is tougher, it makes it that much sweeter for those who ultimately achieve their goals. The SBCSA congratulates the following swimmers:

On September 3rd, Peter Hayden did something which has never been done before in Channel Island history and maybe ever. He started his day off by becoming the 1st person to circumnavigate Anacapa Island (approximately 11 miles) in 5:41:15. Immediately after finishing, he started a second marathon swim (with a completely different course) and became the 47th person to complete the Anacapa channel with a time of 12.4 miles in 6:59:06 minutes. His combined total of 23.4 miles swimming took only 12:40:21.

Carol Hayden became the 49th swimmer and oldest female to ever complete a marathon swim off a California Channel Island on September 9th. Carol swam from Anacapa to Ventura in a blistering time of 9:51:08. Carol who is 64 years and 43 days broke the record set by Pat Gallant-Charette, who at age 60, swam from Catalina to Pt Vincente on Oct 18, 2011. The oldest male to have completed a marathon swim is Emilio Casanueva who was 68 years old when he swam from Anacapa on October 8, 2008.
On Saturday, September 13th, Penny Palfrey became the 50th person to have completed a swim from Anacapa Island to the mainland. Penny had high winds, rough seas and a close call with a container ship to finish on Silverstrand in 6:30:25. This is the fastest swim of the season from Anacapa and Penny’s 4th successful solo swim off a California Channel Island. 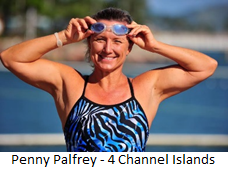 Helen Lin of Quincy, Massachusetts became the 51st person to swim from Anacapa Island to mainland on September 14th. She finished in a time of 8:30:22. Helen encountered strong cross currents which pushed her far off course to the south. While most Anacapa swimmers finish on Silverstrand Beach, Helen finished south of Port Hueneme….almost 2.5 miles away from her intended destination. 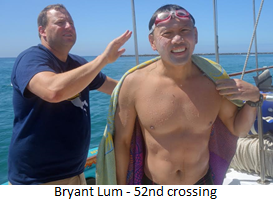 On September 20th, we had 3 successful swimmers complete the crossing from Anacapa to Silverstrand Beach. This is only the second time in history we had 3 swimmers complete the same channel on the same day. The conditions were the best we have this year with calm flat seas, light winds, clear skies and water ranging from 67 to 71 degrees during the 3 swims. Bryant Lum was the first to walk on sand when he became the 52nd person to swim Anacapa. His time of 6:30:44 was the second fastest of the season. Kelley Prebil became the 53rd person to conquer the channel with an official time of 10:25:48. Finally, Dave Tanner swam the channel in 9:36:27 to become the 54th swimmer to successfully navigate the Anacapa waters.