David Yudovin, 63, of Cambria, California, passed away in his home on Saturday from an apparent heart attack. Dave, who had 43 solo marathon swims to his credit, was training for his next swim in the Maldives. 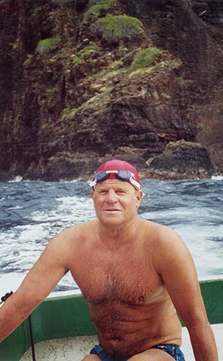 “In a world where many seem to be along for the ride, Dave was a man on a mission, yet always had time to help others. He made a difference” according to teammate Mike Suttle.

Dave was known as a big time marathon swimmer with an even bigger heart. Having survived a heart attack early in life and Leukemia later, he gave freely of his time and money to help the sick and less fortunate. Dave’s favorite charity was City of Hope in Duarte, California which had treated family and friends with cancer.

Dave was on his treadmill training for his next swim, “when his generous heart finally gave out,” said Cambria Fire Engineer Emily Torlano, one of the paramedics at the scene who attempted to revive Dave.

Dave is survived by his lovely and wonderful wife Beth Yudovin who was his coach, manager, cheerleader and fan. Dave will be missed by everyone at the SBCSA.