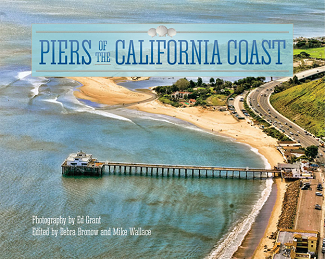 There is a new book on shelves in stores called the Piers of the California Coast authored by well-known surf photographer, Ed Grant. It not only includes beautiful pictures of California’s historic piers, but contains interesting information about each structure. There is also a chapter written by SBCSA President Scott Zornig regarding a 2014 adventure swim around all 73 of California’s ocean facing piers.

This book is excellent for coffee tables, sitting areas, offices and is available from Amazon, Barnes and Noble and many independent California book stores. Should you have an interest, there is a book signing at Fresh Produce Sportswear in Manhattan Beach on August 29 (11am - 3:00pm) where wine and cheese will be served. 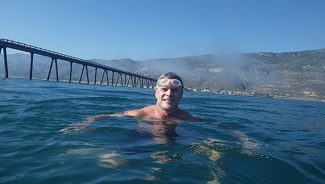 Peter Hayden is the SBCSA’s newest board member. Peter replaces Julian Rusinek who served The SBCSA from 2014 to 2015. We appreciate Julian’s assistance and welcome Peter to this new position.

Peter is the Sr. Vice President of Engineering for a Los Angeles based commercial real estate developer. He awakens at 4:30 every weekday morning to commute 60 miles to LA’s Fairfax District and fit in a 2-hour workout with the Meridian Swim Club Masters before heading across the street to work. On the weekends, he can usually be found swimming in Laguna Beach waters with the Oak Streakers.

A Los Angeles native, Peter has been a competitive swimmer since age 8, and until 2011, had never done anything longer than a 2 mile pier swim. That changed in 2012, when he completed the 6-mile Semana Nautica and the 12.6-mile Distance Challenge. In 2013, Peter became the 283rd person to successfully cross the Catalina Channel. In 2014, Peter received the Marathon Swimmers Federation’s Yudovin Award, which honors the single most adventurous swim of the year, for his record-setting circumnavigation of Anacapa Island, followed immediately by crossing the Santa Barbara Channel to the Ventura coastline, a total distance of approximately 24 miles.

Peter coached the Pacific Aquatic Masters while attending the University of Pacific in Stockton, CA, and married his star swimmer, Carol Hayden. Peter and Carol live in Laguna Hills, CA; their two sons live in Oakland, CA and Gutau, Austria.

Did You Know? San Nicolas Island

San Nicolas Island is the only California Channel Island which has not had a successful relay or solo swim. In fact, no one has ever entered the water to begin an attempt. Marathon swimmers have contemplated different ideas such as swimming to mainland, circumnavigating the island and crossing the channels connecting the neighboring islands. We have even had swimmers go as far as completing applications and submitting sanctioning fees, but the swims did not happen for various reasons. The closest we came to an attempt was in September 2007 when a relay of 6 (Peter Attia, Phil Garn, Marc Lewis, Forrest Nelson, Ed Reynolds and Scott Zornig) motored all the way out to the island and were within 200 yards of starting a relay. For a number of reasons, the group decided against doing San Nic, boated over to Catalina, and completed a circumnavigation around William Wrigley, Jr’s favorite island instead.

The reason marathon swimmers are not lining up to conquer this Island is due to the difficulty. It is 61.7 to 70.1 miles off the California mainland (depending on course). The water is cold, the wind blows hard, the seas are angry, and the island contains the second largest colony of elephant seals in California. If this is not enough, a swimmer needs to secure permission from the United States Navy to access the island. This is sometimes an easy task, but can also be difficult depending on who is commanding the island at the time coupled with current world events.

It is only a matter of time before a brave soul (or group of souls) in incredible shape, tackle this Pacific beast. The SBCSA looks forward to that historic day.