September was one of the most successful months in the history of the SBCSA. We had 7 successful swims and 4 firsts. We did not have one DNF or postponed swim during the 30 day period. Mother Nature behaved herself which is unusual when it comes to SBCSA swims.

Natalie Merrow started out the month by becoming the first person to swim around Santa Barbara Island which she completed in 2:41:58 on September 1st.

Natalie was followed by Micki Poole who on September 12th, became the first hearing impaired person to swim the Anacapa Channel. Micki had a fast time of 7:02:45.

Peter Hayden was next up and he did a very unusual swim. He started off by swimming around Santa Barbara Island and becoming the first male to do so. His time was 3:20:59. Peter then immediately started a second swim from Santa Barbara Island to Catalina. He completed his second swim in a blistering time of 13:27:35. This swim was also a first as it had never been completed solo. 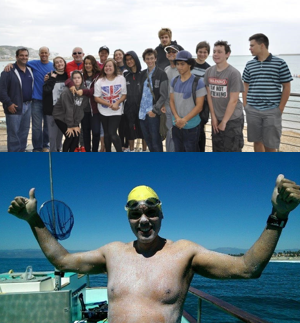 Alex Honor then swam from Anacapa to mainland on September 19th completing his endeavor in a time of 8:52:06. 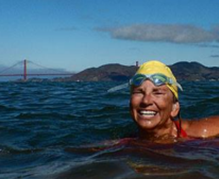 Robin Rose, 55, from Aptos, California is the SBCSA’s 39th lifetime member. She also will be attempting the Anacapa Channel on October 3rd. Robin grew up swimming in our pool, lakes and the ocean, but took time off to raise 4 children. Her two brother-in-laws convinced her to swim from Alcatraz a few years ago. She was instantly hooked on swimming again and now swims year round in Santa Cruz and San Francisco

« Monthly Successes Congratulations to the Class of 2015 »