We congratulate Anthony McCarley, Dave Van Mouwerik, Asha Allen, Becky Margulies, Dan Simonelli, and Scott Zacharda who found success in the first swim of the 2016 season. Team “Out, Around, & Back” completed the first known relay from Catalina to Santa Barbara Island - 24.4 miles against the prevailing current in 16:01 (in 2014, the Laguna Six swam in the opposite direction). 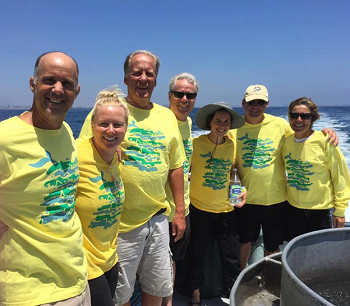 Thank you, Liz and Gary!

Over 150 endemic, or unique, species found nowhere else in the world, including the quick-to-endear island fox, have earned the Channel Islands their nickname as the Galapagos of North America.

Fossils composing the most complete pygmy mammoth skeleton ever discovered were found on Santa Rosa Island, where they roamed the island before the last ice age.

« Chartering a Boat for Your Marathon Swim September Successes »