Here’s an interesting statistic: Of the 137 recognized Channel Islands (ex-Catalina) swims between 1926 and 2016, 104 (76%) occurred during Scott Zornig’s tenure as SBCSA President. After seven years leading our organization (2009-2016), Scott recently decided to step down. So this is a good time to state just how much he has meant to the SBCSA and the sport of marathon swimming. 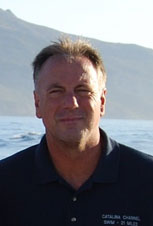 Simply put: the SBCSA would likely not exist today, if not for Scott stepping up and taking the reins in 2009. A significant amount of work goes on behind the scenes of a marathon swimming sanctioning organization - and Scott took much of it on his broad shoulders. He is responsible for recruiting all eight of the other currently-serving board members, who carry out the SBCSA’s most essential responsibility - in-person support and observation of swims. With Scott now passing off the reins, the organization moves forward under its own collective power and momentum.

It’s unclear how the recent history of Channel Islands marathon swimming would have unfolded without Scott, but it’s safe to say there would be far less of it. If you love open water swimming and the Channel Islands (like I do), and think it’s important (like I do) that organizations exist to support, advise, promote, and verify swimming achievements, then please take a moment to appreciate what Scott has done for the sport. It’s a massive contribution - one the SBCSA will never forget.

P.S. – Scott was also quite well known for his newsletters and colorful opinions about marathon swimming. While it’s unlikely his successors will match Scott’s prolific newsletter writing, we will do our best to carry on his tradition of engagement with important (and perhaps occasionally controversial) issues in the sport. In the meantime, I’ve undertaken some effort to get Scott’s full back-catalog of newsletters published on our website. Feel free to take a look back at some of Scott’s “greatest hits”, if you are so inclined, at: santabarbarachannelswim.org/news.