Swimming between Anacapa Island and the California Mainland - A Roadmap

Anacapa Island is a thin volcanic island; it is the easternmost of the four northern Channel Islands, and is located directly southwest of Oxnard, CA. The island is composed of a three narrow islets about six miles long, running in a mostly east-west orientation, five miles east of Santa Cruz Island. The three islets are called: East, Middle and West Anacapa, collectively known as the “Anacapas” by some authors.

The islets have precipitous cliffs, dropping off steeply into the sea. East and Middle Anacapa have fairly level areas at their tops, but West Anacapa is wider and reaches an altitude of 930 feet. Middle Island reaches an altitude of 325 feet and East Island is 250 feet at its highest point. All three islands total 699 acres, or about 1.1 square miles. Anacapa is part of the Channel Islands archipelago and is part of the Channel Islands National Park.

This swim is 12.4 statute miles in length. 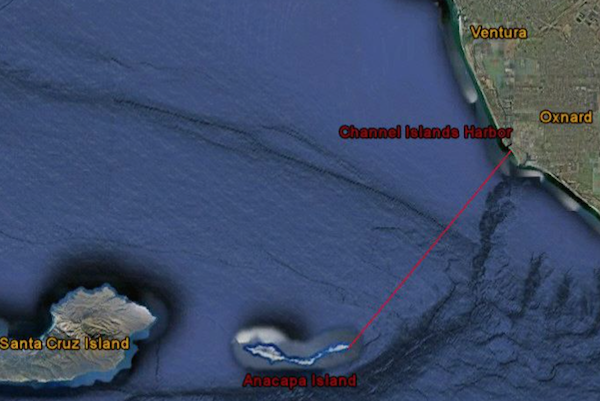 Latitude/longitude (in DMS) of the swim start is as follows:

Depicted below is a topographic map of Anacapa Island. The red circle at the east end of the island, right next to Arch Rock, identifies the location for the most common start of this swim. The Anacapa lighthouse is located at the top of this part of the island, and is easily seen at the start of the swim.

Below is an aerial image of Anacapa Island; the red dot is the typical starting point of this swim.

Below is a photograph of the swim start, and depicts the eastern end of Anacapa Island, and Arch Rock which is located about 125 yards from the island. You can see the Anacapa Lighthouse in this photo. As the boat idles about sixty yards off of the island, the swimmer enters the water and approaches the island, which is a vertical cliff dropping into the ocean—this is a deep water start. The swimmer places his/her hands on the island in full view of the SBCSA observer, and the swim is underway. 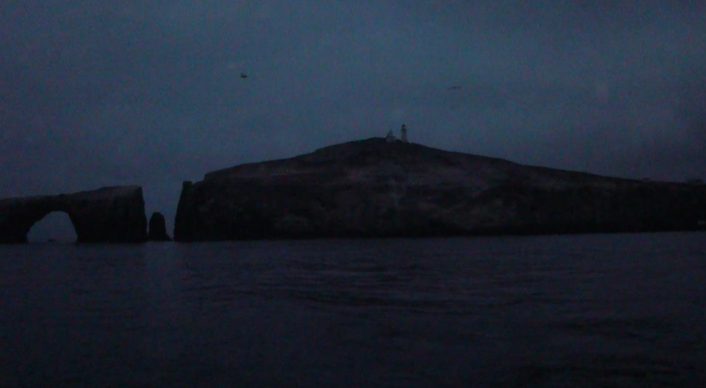 The latitude/longitude of the swim finish (in DMS) is as follows:

This swim ends at the red dot on Silver Strand Beach, just southeast of the entrance to the Channel Islands Harbor. About three quarters of a mile further to the southeast is the entry to the Port Hueneme deep water harbor. 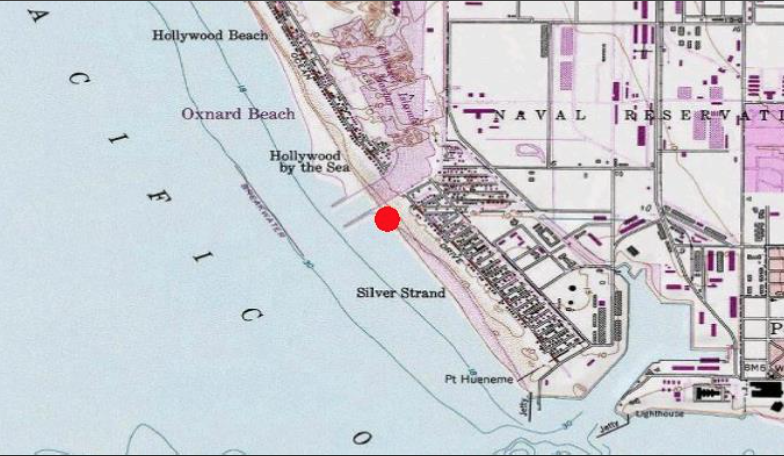 In this aerial photograph of the swim finish, the entry to the Channel Islands Harbor is easy to pick out (just north of the red dot). Also clearly visible is the outer breakwater that runs parallel to the beach. 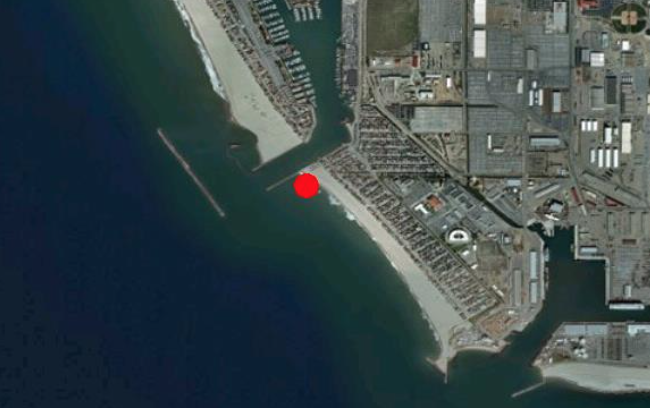 And at the far end (to the southeast) of the Silver Strand Beach is another view of the Port Hueneme Harbor.

Here is a photo of the end of this swim. The rocks on the left side of this photo are the base of the breakwater of the entry into Channel Islands Harbor. As inhospitable as the start of this swim is, the end is kind and gentle: sandy exit and no rocks. Typically there is no large surf when exiting the water, although on some days there can be significant surf, which the swimmer will have to contend with. 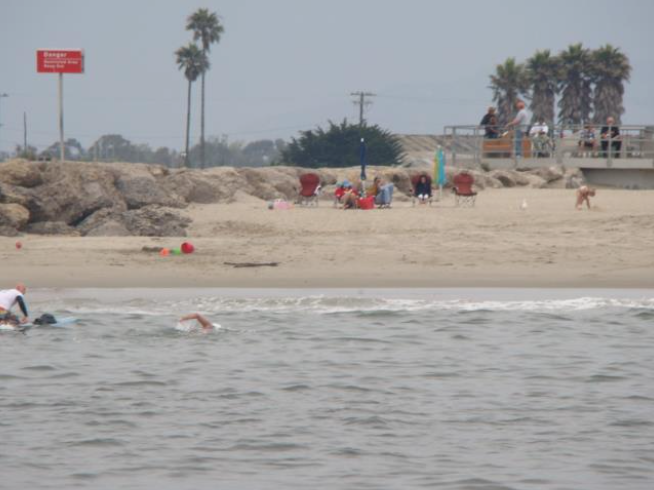 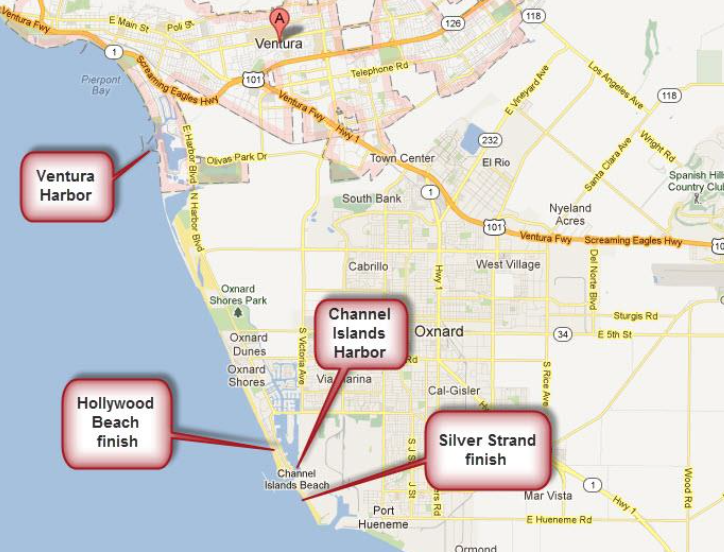 See this page for further information about some suggested pilot boats and kayak escorts.

There are a variety of motels in the area. For a start in locating a place to stay, you can look at this Google map.

When swimming between Anacapa Island and Silver Strand Beach, there is a single obvious point of locational reference for the swimmer, namely an oil rig named Gina. Barring any significant currents that would push the swimmer westward of his/her line, Gina will be visible off of the swimmer’s left side, at a distance of .68 statute miles from the direct swim line. Gina is located 4.0 statute miles from the finish of the swim. 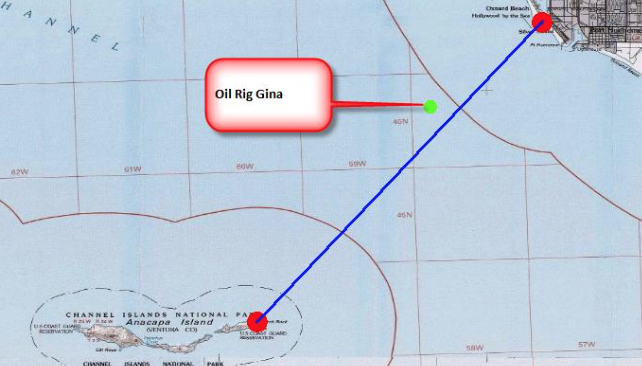 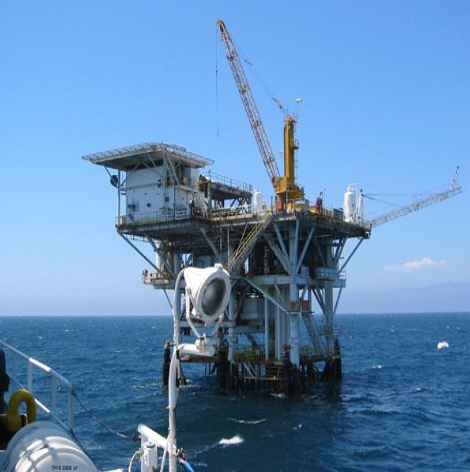 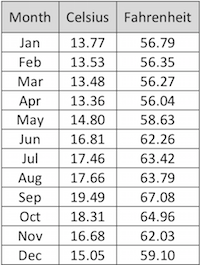 NOAA has a National Buoy System, and there is one particular buoy, Buoy 46217, called the Anacapa Passage Buoy. Sea water temperatures reported at this buoy are very relevant to swimmers considering this swim. Click through to NOAA for various measurements made from this buoy.

Typically, an Anacapa crossing ends on the Silver Strand Beach, a .9 mile stretch of beach between the Channel Island Harbor mouth and the Port Hueneme Harbor mouth. 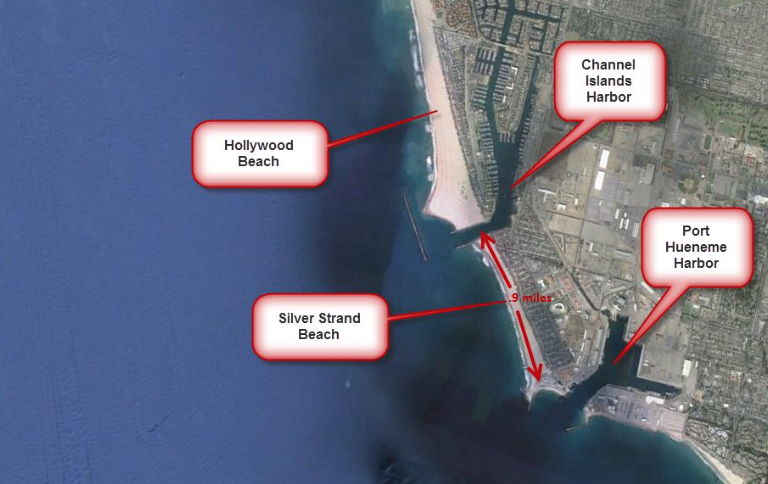 It is possible, depending on unpredicatable along-shore currents, that an Anacapa crossing might end either north or southeast of the Silver Strand Beach. To the north of the Channel Islands Harbor is Hollywood Beach (approximately four miles long), and this is an acceptable finishing point for an Anacapa Swim. Because of Hollywood Beach’s north/south orientation, however, the further to the north on Hollywood Beach that a swim ends can greatly lengthen the swim route. 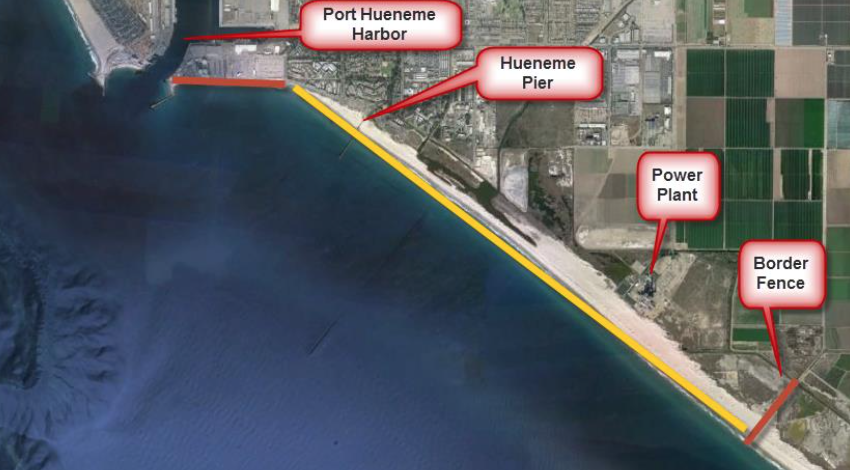 The yellow line depicts a 2.8 mile stretch of beach ending at a Border Fence marking the start of Point Mugu Naval Base. It is acceptable to land on the beaches marked by this yellow line, but not south of the Border Fence. It is not acceptable to land along the .5 mile long red line immediately to the east of the harbor mouth—that area is covered with riprap, and a finish in this area is not advised nor permitted. The power plant is also identified on this map—it is an easily discernable landmark as the swim is approaching the shore. It is about .8 miles from the Border Fence.

If a swim finish southeast of the Port Hueneme Harbor is anticipated, it must be planned for well in advance of approaching the coast (it should be planned 1-2 miles from shore). This is to ensure that a swimmer, closing on Silver Strand Beach, is not pushed in a southeasterly direction directly in front of the mouth of the harbor. This would put the swimmer in immediate danger of the shipping activity entering or exiting Port Hueneme. If the swimmer runs the risk of being swept directly in front of the harbor mouth, the swim must be ended immediately—the swimmer and any kayak escorts must be removed from the water and distanced from this dangerous situation.

So again, as previously stated, if a swim finish to the southeast of Port Hueneme Harbor is anticipated, the boat captain and swim crew must plan for, and set up, this course while still 1-2 miles from the coast.